In a press release of Islah in Aden, Islah has been forced to endure fierce media campaigns for preserving security and national partnership

A press release was issued, on Saturday, by the Yemen Islah Party in Aden Governorate on the security situation suffered by the party in light of targeting it and its cadres over three years.

The Islah of Aden, since its origin as a political party in the interim capital Aden, has been a true partner with all political forces and community components in the service of this valiant governorate and its good sons.

In the press release, the Islah said that despite all the political transformations that have passed, the Islah in Aden has maintained its values and principles, giving priority to patriotism and public interest more than its own interests.

The Islah also affirmed that it will remain steadfast in its principles and values and will not slip into the square of violence, because it understands that preserving the homeland, its security and the safety of its people are the most important.

The Islah reviewed the events and the number of cases in which the Islah has been targeted, its cadres and its headquarters over the past three years.

Text of the press release:

The Yemeni Islah Party, since its origin and the beginning of its work as a political party in the interim capital Aden, has been a true partner with all political forces and community components in the service of this valiant governorate and its good sons.

Despite all the political transformations that have passed, the Islah of Aden has maintained its values and principles, giving priority to patriotism and public interest more than its own interests.

In return for these values, the Islah has endured fierce media campaigns by its opponents and rivals.

Of course, the war of 2015 came as an opportunity for the Islah to prove that the love homeland in general and Aden in particular is the doctrine of its members and cadres. The Islah has offered sacrifice, martyrs, blood and every precious thing to protect its city, homeland, land and belief, as well as for the sake of peace against those forces of the coup that broke all political dialogues and national conventions, ignoring values, ethics and love of peace, and then came to make everything permissible, but the Victory was ally of this city and its sons (from all the living forces and with a great support from the forces of the Arab Alliance led by the Kingdom of Saudi Arabia).

And with the end of the war on Aden, Aden has become under the control of a militia that does not believe in democracy or the political process, rejecting the three references, foremost of which is the Gulf initiative. This militia began working on the exclusion of the party of Islah and the declaration of war against it, launching against it funded media campaigns in some of the suspicious media platforms for the demonization of the Islah. The Party is aware that it is facing all these campaigns because of its adherence to the legitimacy, its positions in support of the Arab Alliance led by the Kingdom of Saudi Arabia, its belief in the political process, its refusal to control the public life in Aden by the militia and its adoption of all contents of the political references, and the Gulf Initiative and its executive mechanism.

Today, however, armed militias have resorted to more extreme and terrorism methods in attempting to eliminate the Islah Party. So, they resorted to killing, assassinations, detentions, kidnappings, burning and breaking into headquarters, breaking into homes of leaders and spreading a culture of intimidation, terrorism and threat.

Here, we affirm that Islah Party will remain steadfast in its principles and values and will not slip into the square of violence, because it understands that preserving the homeland, its security and the safety of its people are the most important.

In return for all that is happening, the Islah Party also confirms that it will not waive its right all the crimes committed against its cadres and members, stressing that these crimes will not lapse by prescription. We are now in the process of preparing the full legal files for submission to the courts and international organizations as we have already submitted to local courts and organizations, and we are sure that the all criminals will be brought to justice.

We present the series of crimes committed against the Islah Party of Aden during the past three years to the government and the leadership of the Arab Alliance represented in the Kingdom of Saudi Arabia as well as all local, regional and international human rights organizations and all our great Yemeni people, as follows:

This is a statistic of the assassinations and violations that targeted the leaders and activists of the Islah Party in the interim capital Aden over the past three years:

1. On December 29, 2015, the headquarters of the Islah Party in Crater-Aden and the Office of the head of the Executive Office, the Parliament member, Mr. Ansaff Mayo, were targeted by a car bomb after the bombing of the headquarters gate by gunmen driving three armored vehicles.

2. On August 15, 2016, the leader of the Islah Party — the former head of the executive bureau — Sheikh Saleh Hulais, was assassinated by gunmen riding a motorbike in al-Mansoura area. The martyr was Imam and preacher of the Redha mosque in al-Mansoura.

3. On May 6, 2017, gunmen on three patrols belonging to the department of Security of Aden broke into the headquarters of Islah in Crater-Aden and burned it.

4. On May 6, 2017, the headquarters of Islah headquarters Dar Saad district was targeted by throwing a bomb on its outside wall.

5. On October 11, 2017, security forces of Aden arrested the Assistant Secretary of the Islah Party in Aden, Muhammad Abdul Malik and Dr. Aref Ahmed Ali, a member of the Shura Council of the Islah Party from their homes in al-Qallu'a.

6. On October 11, 2017, the security of Aden broke into the house of the Islah Assistant Secretary of Aden Muhammad Abdul Malik after his arrest, as well as broke into house of Dr. Aref Ahmed Ali, a member of the Islah Shura Council in Aden and looting the contents of the two houses and terrorize their families and neighboring houses in the city of al-Qallu'a of al-Tawahi Directorate.

7. On October 11, 2017, the security of Aden arrested a number of leaders and cadres of Islah Party in the city of Qallu'a; they are: Ayman Shiwala, Ammar Afara, Wahib Hail, Youssef Afara, Muhammad Abdullah Al Hakimi, Osama Ishfaq, Mohammad Sharaf and Ma'moun Shiwala.

8. On October 11, 2017, the headquarters of the Islah, located at Al-Qallu'a in the Directorate of al-Tawahi was stormed by the security of Aden, arresting its guards after its closure.

9. On October 12, 2017, gunmen belonging to the security belt forces stormed the headquarters of the Islah Party and burned it.

10. On October 13, 2017, the security forces broke into the house of the head of the Information Department of the Islah Party in Crater-Aden, Khaled Haidan, and tampered with the contents of the house as well as terrorizing the children and the residents.

11. On October 13, 2017, forces of the Security Belt stormed the house of the leader in Islah Party in Crater-Aden, Yaser Mughallis, firing live bullets inside the house and terrorizing the inhabitants.

12. On October 22, 2017, an attempt to assassinate the leader in the Islah Party, Sheikh Muhammad Ali al-Nashiri, at the Directorate of Dar Saad, by an explosive device planted in his car. Al-Nashiri is the preacher of the Rahman mosque in Aden.

13. On November 5, 2017, targeting the headquarters of the Islah Party in the city of Dar Saad by an explosive device was planted on its wall.

14. On December 12, 2017, the assassination of a member of the Islah Shura Council of Aden and the imam of Abdul Rahman Ibn Auf mosque in the technical city of al-Mansoura, Sheikh Fayez Fuad, by gunmen driving a security patrol.

15. On January 27, 2018, a leader in the Islah Party in the city of al-Mu'alla, Zakaria Ahmed Ali, was kidnapped by forces of the Aden Security Administration and the continuation of hiding him forcibly for more than 8 months and till now.

16. On February 13, 2018, a member of the local council, a member of the executive bureau of the Islah Party, Sheikh Shawqi Kamadi, was assassinated by gunmen riding a motorcycle in front of his workplace in al-Mu'alsa.

17. On March 28, 2018, the security forces of Aden arrested a leader in the Islah Party, Sheikh Nidal Bahuwairith, in front of the Dhuhaibi mosque in the city of Crater, and hid him for four months without charge.

18. On May 9, 2018, a leader of the Islah Party, Safwan al-Sharjabi, was assassinated by gunmen in front of his home in al-Mu'alla district. Martyr Safwan Al-Sharjabi was the head of the legal department at the October 14 Foundation for Press and Publication.

19. On June 23, 2018, an attempt was made to assassinate Sheikh Abdul Haq Al-Shuja', imam and preacher of al-Eman Mosque, who also was also a leader in the Islah Party in Dar Saad, by planting an explosive device at his house gate.

20. On July 17, 2018, an attempt to assassinate a leader in Islah Party, Sadiq Ahmad and his bodyguards in the city of al-Qallu'a by gunmen riding in a Corolla car and a Hiace bus.

21. On July 31, 2018, a failed assassination attempt targeted Dr. Aref Ahmed Ali, a member of the Shura Council of Islah in Aden, by an explosive device planted in his car and seriously wounded his son.

22. On August 8, 2018, an assassination attempt targeted the head of the Legal Office, a member of the Executive Office of Islah Party in Aden, lawyer Arafat Hizam, by an explosive device was planted in his car.

• 5 Burning and storming the headquarters of Islah Party.

• 4 cases of breaking into houses. 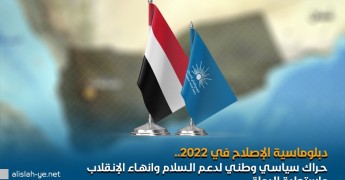